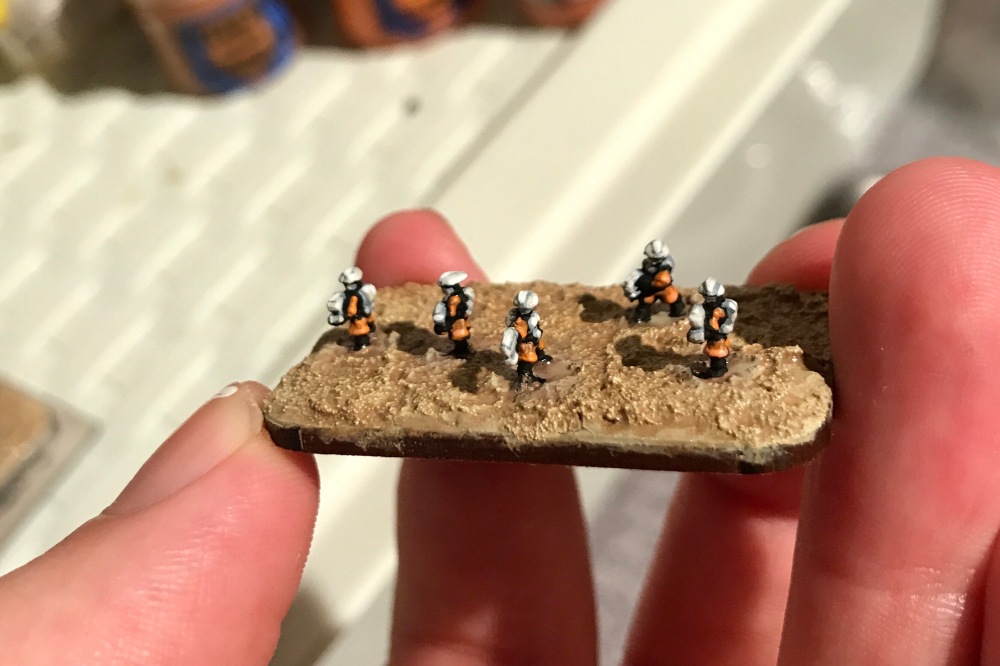 I’m on a bit of a 6mm kick again at the moment and placed a pretty big order from the excellent Vanguard the other day for a whole pile of Skinnerz, they’ll form the first force for my ‘Ork Warz!’ project (a sort of mass battle Gorkamorka that I’ll post about later).

I felt a bit guilty for neglecting some of the other 6mm I’ve got on the go though (mostly glued to textured bases and left on the shelf) so I started painting the Okami battlegroup I bought a while ago – by the excellent Onslaught miniatures (also bought from Vanguard).

Ignore the ‘glossy’ aspect of the base above – I have a gloss varnish/paint mix I use to colour bases (I hate drybrushing) which will get a matte coat at the end. They also need boots and gloves painting – though those’ll stay close to black (maybe black highlighted with mid grey).

I’ll be using my homebrew extra units for Horizon Wars with these – I’ve got Neo Shinobi (as above), those will probably act as either AB Infantry or Special Forces with a ‘short range’ upgrade, I’ve got Shinobi Snipers who’ll be Recon units, I’ve got Yurei as Light Cav and I’ve got 3 of these with the turrets from these – some P2 mechs with indirect fire and maybe drop frames (recon sneak into position, artillery mechs drop into safe positions and give indirect fire whilst the light cav and SF run distraction). I’m painting up about 25P worth, though I’ll mostly be using less.

Anyway – I hope to box these off sharpish (the above took about 20 mins)… I’m moving again at the end of July so trying to get as much as possible to the ‘varnished’ stage before then.