Managed to get a good bit of basing and varnishing and priming done today. These 5 will populate my city-tile souk and serve as NPC’s for other games. 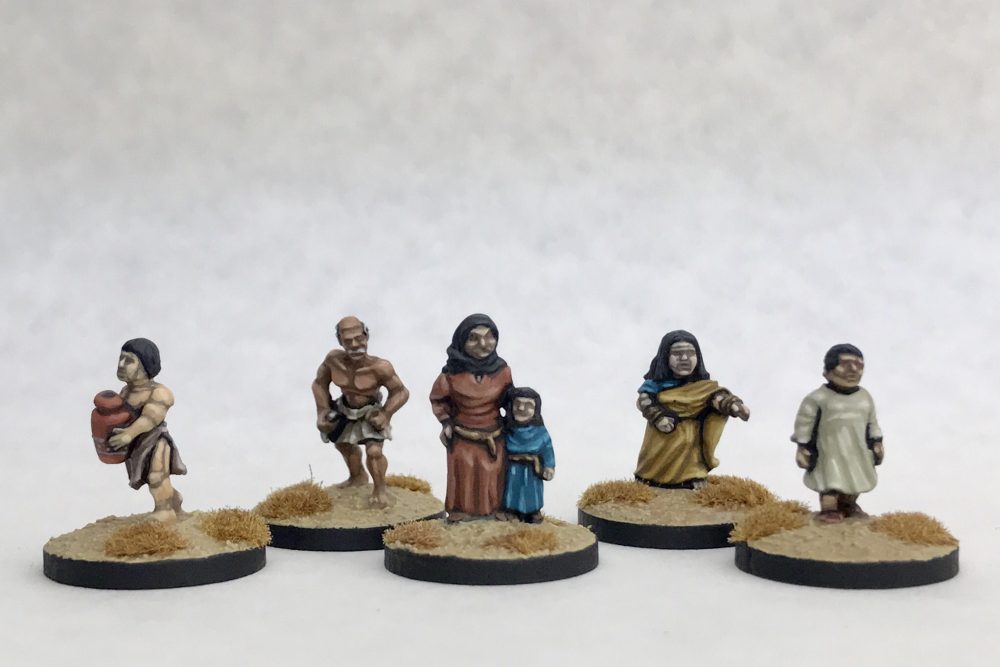 You’ll notice that my desert world is (at least clothes wise) pretty multi-cultural (we’ve got a Black Hat Indian civilian, a Xyston chap, some dark age ladies from Donnington New Era then two more Indian civilians). I need to vary my skintones a bit, but I find in 15mm that the darker the skin the harder it is to make look good. Must experiment a bit, as I struggle to go darker than the walnut colour of the Xyston chap at the moment.

Talking of the Xyston guy, he’ll make a great assassin, he’s got a good sneaky pose and a dagger in hand, so must start thinking of a game involving that. On the whole, very pleased, and very glad they’re finished. There’s another 40 odd minis in this collection of civvies I’ve scavenged up, so plenty to crack on with. These were all painted in the layering/Heresy-Brush method I mentioned a post or two ago. I think it worked better than the cowboys, so maybe it is the subtlety of the cowboy sculpts that make them tricky.

Next up is a 15mm Merc from GZG. Not my greatest work and I see the gun is a bit bent now. Still, nice to have another character to add to the pool.

So, what’s next? Well, my Crom’s Anvil Crom-funder arrived, so likely start on a small Pict warband with the chaps that are designed to go along with the Copplestone Picts.

I bought two sets of these 5 – the Trader and bodyguard could easily be tweaked for sci-fi too. Did I hear someone say Abdul Golderg?!

One thought on “Pottering About Town!”